Les Atkinson Park is located between Beenleigh Road and the Sunnybank Railway Station, and is around 16 hectares. Approximately 4 hectares is amenity park areas with playgrounds, basketball courts, BBQ facilities as well as pathways which are well used by local residents. 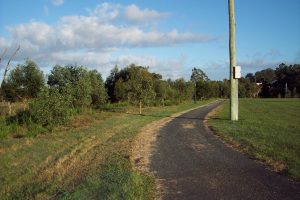 There is a permanent wetland of around 7 hectares, and 2 vegetated corridors totalling around 5 hectares are situated along the northern and southern borders of the park.
The park was established in the 1990s and prior to that parts of it had been used for small crop production for many years up to the 1970s. During the 1980s the area fell into neglect and disuse. Frequent fires seemed to be a feature of these years particularly in the wetland area in the drier spring months.

In 2000 a Habitat Brisbane group (Les Atkinson Park Bushcare Group– LAPBG) was formed at the initiative of Greg Sullivan who called a public meeting to gauge interest. Greg became the group coordinator until 2009, when Michael (Mick) Richardson took on the role.

In 2003 the group applied to expand activities into 2 parks just downstream on Stable Swamp Creek, A. H. Parker Park and Jock Hing Park, for the purposes of weed control and additional plantings.

In April 2019 permission was obtained to start work on weed control in Dyson Avenue Park which was badly infested with climbing asparagus and other weeds.
All these parks have Stable Swamp Creek running through them. The creek starts not far from Les Atkinson Park, just south of Hellawell Rd, and flows westward to join Oxley Creek at the southern end of Oxley Creek Common.

Working bees are usually held on 4th Saturday of the month, but can vary depending on people’s availability. The group generally works from 7 – 10am in warmer times of year and from 8 – 10am in cooler times. There are normally 5 to 10 people at monthly working bees and new volunteers who wish to join are always welcome.
Working bees usually involve various weed control measures to allow natural regeneration. Small planting projects are undertaken sometimes. In past years larger planting projects were carried out in some areas, usually with the involvement of community groups e.g. schools, Sunnybank Scouts and the Tzu Chi organisation.

In the early stages of the covid pandemic Habitat Brisbane activities were cancelled, from early April to mid May 2020. Luckily this shutdown period was not too long and coincided with dry weather so weed and grass growth was not as rapid as it would have been during summer weather. In the current HB activity year which started 1 July 2020 our group has had 42 volunteers assist us.

Since its inception in 2009 the OCCA CreekCare team has assisted LAPBG with 4-5 working bees a year. Their help is much appreciated as Noel Standfast and his team have a lot of experience and knowledge between them.

Sedges are an indicator of this regional ecosystem. Represented in the park are genera Cyperus, Eleocharis, Bulboschoenus, Gahnia and Schoenoplectus. Dominant trees in the wetland are Melaleuca quinquenervia, Casuarina glauca and Lophostemon suaveolens and lesser numbers of Eucalyptus tereticornis, Melaleuca linarifolia and Melaleuca sieberii.

Fern thickets are present in many places with species Hypolepis muelleri, Calochlaena dubia and Pteridium esculentum, with Cyathea cooperi in fire protected areas. Banksia robur plants are present in places. Other parts of the wetland consist of stands of Phragmites and Typha.

Some of the wetland areas are weedy with exotic grasses and other weeds which enjoy the moist conditions but do provide good habitat for wildlife. The group maintains backburn lines/firebreaks by regular brushcutting along the northern edge of the wetland and other places to assist in times of fire and to provide access for us to reach work areas.

Other vegetated areas along the northern and southern borders of the park are quite varied consisting of large eucalypts (mainly Eucalyptus tereticornis), Melaleucas and Casuarinas with scrubby understorey such as Syzygiums, Ficus, Glochidions, Mallotus and Macarangas and vines such as Parsonsia, Pandorea, Cissus and Austrosteenisia.

Part of the northern boundary along an elevated filled embankment was planted in 2007 as a project involving local community groups and is mainly a planting of Eucalypts and Acacias of the local area representing the Regional Ecosystem 12.5.3a which is (or was) the dominant ecosystem of the local area away from the creek valleys. Scribbly Gums (Eucalyptus racemosa) are a feature of this ecosystem.

LAP with its permanent water supply provides good habitat for many species of wildlife and the large area of the wetland which is fairly impenetrable to humans without considerable effort. It is a good habitat for the 3 local species of Fairy Wrens and White Browed Scrubwrens which cannot survive in the surrounding suburbia.

There are 108 native bird species and 9 introduced species that have been recorded in the park. Occasionally another new sighting is added to the list. In the last 2 years Bar Shouldered Doves have been observed many times. They were not seen by the bushcare group in LAP until 2019 (although they are quite common along Oxley Creek) so it may be due to our improved habitat value.

Ringtail and Brushtail Possums as well as Northern Brown Bandicoots are found in the park. There is a roost area for Grey Headed and Black Flying Foxes and on 2 occasions these have been joined for a short while by large numbers of Little Red Flying Foxes.

Weeds proliferate under the roost area which is quite extensive and weed control can only be done if the bats relocate somewhere else, which is very seldom, and unpredictable, but can occur for 1 – 6 weeks , but usually only once in a few years . Otherwise, the park is pretty much their permanent home.

The Rakali (Water Rat) is sometimes seen in the creek as are Brisbane Short- Necked Turtles and Eastern Long- Necked Turtles. Long -Finned Eels inhabit the creek and on one occasion one was seen eating a snake.

There are 5 species of frog listed as being found in the park but usually it is the Striped Marshfrog and Eastern Sedgefrog that are encountered. Reptiles commonly seen are Eastern Water Dragons, Eastern Water Skinks, Common Tree Snakes, Carpet Pythons, Keelbacks and Red- bellied Black Snakes.

Come and join us!

There will always be work for a bushcare group to do in this area to maintain what has already been done and there is plenty of potential to improve habitat in many areas, so come and join us.