The 2015/16 financial year was pivotal for the Lawson and Kendall Street Bushcare Group at Oxley. During 2015 the Commonwealth Government approved funding for a “Green Army” project to help restore nearly a hectare of bushland in the Lawson Street Park (later named Ed Kuepper Park) at Oxley.

Activities for the project included weed removal, assisting regeneration of native species and the planting of native vegetation to restore significant habitat. Restoration works were also aimed at consolidating the banks of Oxley Creek to reduce erosion and have a positive impact upon water quality in Oxley Creek. This work was supervised by Conservation Volunteers Australia (CVA). 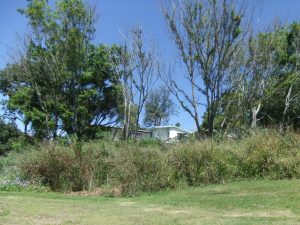 Previous to the CVA work commencing, the site was a typical weedy riparian zone found along much of lower Oxley Creek. While local native species such as Forest Red Gums (Eucalyptus tereticornis) and Cheese trees (Glochidion ferdinandi) emerged above the weedy habitat, it was not until some of the woody weeds such as Chinese Elms (Celtis siensus) and Brazilian Pepper Trees (Schinus terebinthifolia) were treated, was it discovered just how many different native species survived decades of competition with introduced species. These native species included Hard Quandong (Elaeocarpus obovatus), Small Leafed Tuckeroo (Cupaniopsis parvifolia), and the less common Native Caper (Capparis arborea).

On-ground work for the “Green Army” project commenced in 2015 and continued into 2016. During this time the CVA team selectively stem injected or removed many woody weeds. Once some space was created CVA planted hundreds of native tube stock along the riparian zone of Oxley Creek and in the rocky landfill at the end of Kendall Street. Most of the species planted were a combination of well-known local pioneer and emergent trees as well as vines and scramblers. However, some species planted such as the Blue Quandong (Elaeocarpus grandis) were outside of its normal ecosystem. Never the less they add an interesting topic for conversation.

Coincidently as the work at Kendall Street moved into the early months of 2016 I started paying more attention to the area around the Mayfly statue at the roundabout intersection of Oxley Station Road and Oxley Road. From my previous involvement with the Oxley Creek Catchment Association (OCCA) I was aware of the history of the statue and the area of “Mayfly Creek” immediately behind the statue. A few years before, the Brazilian Pepper Trees which grew thickly along the creek had been removed as part of commitments to locally control this species. 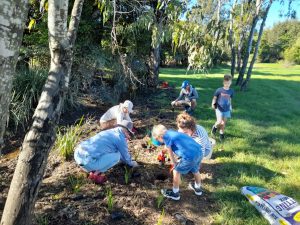 I approached Brisbane City Council seeking improvements to the contractors mowing and weed control around the Mayfly statue. However, I was left frustrated as the site did not rate highly enough with Council to receive better maintenance even though it was one gateway to the Oxley suburb and was passed by thousands of vehicles daily. To upgrade maintenance for the site I decided it would need a community group to take on the task, but where to find volunteers and how to obtain Council assistance? In the meantime, I started controlling vine weeds in the Casuarinas and Melaleucas as best I could.

At the same time that I was seeking improvements around the Mayfly statue, Kendall Street resident Dorothy Watson was anxiously watching the loss of CVA plantings due to a lack of follow-up weeding after the Green Army moved on. The approaching hot and potentially dry months also concerned Dorothy as some of the natives were planted into the rocky landfill near her house.

In response Dorothy began hand weeding and watering this area close to her home to try and save the valuable plantings during the early months of 2016. Serendipitously, while Dorothy and I were pursuing our own local environmental interests, the Habitat Brisbane (HB) program had delisted several older groups so had capacity to add new groups. About this time Dorothy and I were introduced by mutual friends in OCCA’s CreekCare team. 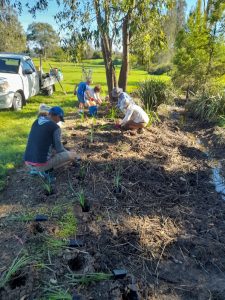 From there the OCCA grapevine was in action as we were contacted by Andrew Wallace, Habitat Brisbane Officer, South Region to see if we were interested in forming a HB group. The new group would cover both the areas along Oxley Road and Lawson Street parkland and Kendall Street parkland. While the HB application process seeking material and technical assistance seemed daunting Andrew encouraged us to apply.

An important factor supporting our application was recognition of an area along Oxley Creek zoned Regional Ecosystem 12.3.1 Gallery rainforest (notophyll vine forest) on alluvial plains. This zone, located in a meander of Oxley Creek was significantly degraded due to weed invasion. However, there were still several rainforest species hanging on. In particular Hard Quandong, Small leafed Tuckeroo), and Native Caper.

As they say – the rest is history and hard work. From our first official working bee on 16 July 2016 Lawson & Kendall St Bushcare volunteers have contributed well over 1,500 hours on-ground work across 8 zones. We also have to thank all the HB Officers over the years who have ensured we have the right resources from PPE to contractors to improve our bushland sites.

Meets third Sunday of the month at 8am
Rod Goldsworthy 0409 050 249, Rod.goldsworthy@gmail.com