The dha’ gun (place) that we inhabit has gone through many changes, the creek now known as Oxley Creek was, not long ago, known as Benarrawa and was surrounded by dense forests that housed mu’rtlkil’tchi (black swans), bug’wal (wallabies), and dum’pribi (koalas) (Roberts, 1991). Benarrawa (the Oxley Creek) has seen major changes going as far back as 18,000 years when the last climate event gradually moulded Mairwar (the Brisbane River) into what we know today (Kidd, 2001). It became a Kul’gun (transit track) for people coming from all directions and then became a hub of industry, first with resources and then with trade. Now the Oxley Creek Common is being rehabilitated into a more sustainable home for wildlife and bush walkers, the following is a look at the history of  the Oxley creek Common.

Sources for the language translations come from the State Library of Queensland and the Yugambeh Museum Language and Research centre. 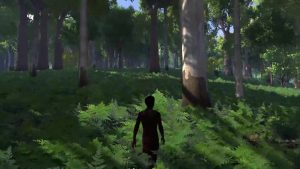 Mairwar (the Brisbane River) was formed as coastlines encroached following the end of the last ice age and took on its modern form some 6,000 years ago (Gregory, 1996). Benarrawa (Oxley Creek) became a tributary to the river, feeding it tab’bil (fresh water) from as far away as spring mountain. Along the riverbanks and creeks were dense forests that included huge ngoa’-nga (moreton bay figs – ficus macrophylla), bil’lai (swamp she-oak – casuarina glauca), and kag’arkal (acacia mearnsii). low-lying swamps interspersed the creeks and large open forests dotted with old growth miing’ar (eucalyptus tereticornus) scattered the high banks, these open forests were the result of controlled firestick farming practices by Aboriginal people managing the land. To fish in the creeks the use of hand held scoop nets known as tow-rows was the usual method, as well as set nets, fishing weirs, and a chemical infusion made to stun fish known as tabgall (Gregory, 1996). Life was abundant around the rivers and creeks with marutchi (black swans), bulualum (pelicans), ngau’ (ducks), murri (kangaroos), dumbirrbi (koalas), and binkin (turtles). Long white worms called kambi (Teredo navalis) were farmed on the banks of worril (rivers) and  Yin’nel (creeks), where piles of cut timber were stacked one metre high and two metres wide (Petrie, 1992). The burril (logs) would be fixed at points on the bank where the water would regularly cover the logs at high tide and uncover them at low tide so that the kambi had the ideal conditions. The structure would be left for up to a year before the kambi were harvested and new timber logs were installed (Petrie, 1992). Benarrawa (Oxley Creek) was a camping ground and trail for people navigating their way to ceremonies from as far south as the Clarence river to the Bunya Mountains in the west (Kerkhove, 2015), major camp grounds were situated on higher grounds away from flood plains. Flooding was apart of the life cycle in Meanjiin (Brisbane) and traditional stories were told of great floods and long droughts, early Europeans to the area noted evidence of high waterlines and debris in trees (Cook, 2016) 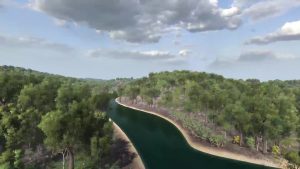 The first Europeans in the area were three convicts in 1823 that had been caught in a storm and blown off course while sailing from Sydney to Newcastle, they finally came ashore on Moorgumpin (Moreton Island) twenty-five days later. While they were trying to walk back to Sydney they came to Benarrawa (Oxley Creek) and stole a canoe before returning to the coast to live with the local Aboriginal people, until John Oxley found them in 1823. Oxley subsequently explored the river and its creeks deciding this area was a prime location for resource extraction and a settlement, writing in his notes that there are “rich lands & fine timber” in the areas of modern West End, Graceville and Indooroopilly “equally well adapted for cultivation or grazing, the timber abundant and fit for all the purposes of domestic use or exploitation” (Ginn, 2013). 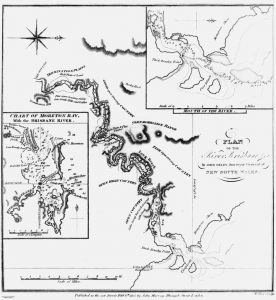 Early settlers in 1826 were excited by the fertile soil, dense rainforests, open grassland, and rich vegetation along the banks, the settlers then went to work cutting down the timber for building a new British colony. Benarrawa (Oxley Creek) that was once surrounded by thick forests quickly became cleared of large trees and by 1860 it was largely pastoral and cropping land for new settlers. In the early years the Yugara and Yugarbul people would trade fish with the Europeans for flour, sugar, and tobacco, however, as the Europeans introduced diseases and destroyed Aboriginal resources, relations inevitably became more hostile. European diseases spread through the country and in 1839 an Aboriginal man named Toongoomberoo, who was in perfect health two months before, was found dying of tuberculosis along Benarrawa (Oxley creek) (Fisher, 1990). The early settlers employed plans to destroy the native animals, murri (kangaroos) and bug’wal (wallabies) were rounded into enclosures and killed en masse, the animals were killed for eating European crops or competing with introduced stock for food (Thorpe,1986). Frontier conflicts increased as the colony became larger, resources became scarcer, and the Aboriginal clans became smaller through dispossession of the land, disease, and murder. A chronicler of early Brisbane, Tom Dowse, wrote in 1842 that “the presence of a Military force was absolutely necessary. the surrounding country. was in those early days. swarming with wild aboriginal savages, making it unsafe to go far from the settlement. unless in Company and well arm’d” (Fisher, 1990).

Europeans recorded their first major flood of Brisbane in 1841, the Post Office gauge reached 8.43m and a second flood in 1844 reached 7.03m. The extraction and destruction of vegetation along the rivers and creeks caused erosion events, “studies of floodplain and marine sedimentation suggest that widespread clearing, logging and farming by the first European settlers from the 1840s produced substantial increases in catchment erosion with increased rates of sedimentation in floodplains and estuaries” (Kemp, 2015). Once there was sufficient space available around fresh water sources, large scale sheep and cattle industries emerged, between 1860 and 1870 sheep numbers in the Brisbane catchment increased from 298,436 in 1860 to 399,860 in 1870, where cattle numbers rose from 125,000 in 1860 to 528,619 in 1870 (Kemp, 2015). Sheep and cattle grazing results in soil compaction and vegetation destruction and leads to increase surface drainage into the river and creeks, “Empirical measurements and models suggest that river sediment loads increased between 2 and 14 times following the arrival of Europeans” (Kemp, 2015). Flooding continued in Brisbane with major bank erosion being reported around the large floods in 1857,1863–64,1887 and 1890, “The Moreton Bay Courier of 28 May,1857 reported ‘many landslips’ on the Brisbane and Bremer Rivers two days after floodwaters rose between 35 and 45 ft (9.2–12.2 m) ‘above the level” (Kemp, 2015).

This area that we now know as the Oxley Creek Common was first bought by Mr. Amos Radcliffe in the early 1860’s, land in the area was selling for one pound an acre at the time and Mr. Radcliffe was able to purchase a large part on both sides of Benarrawa (Oxley creek). A flood in 1863 destroyed homes, crops, and workplaces around Benarrawa, although not recorded as a major flood in the records the low-lying nature of the area meant that many people leasing the land had no option but to leave. Originally landowners cultivated seasons of mixed crops such as; corn, potatoes, bananas, arrowroot, and cotton, farmers in the area came together and decided to start growing sugar cane and Mr. Radcliffe decided to erect a sugar mill to crush the local cane (Fones, 2004). The primitive sugar mill used a horse to turn the shaft rotating the cane crushing steel rollers, the effort of transporting the cane to the mill was too time consuming and therefore other mills began to spring up in the area. However, after 3 devastating frosty winters the sugar cane crops became unprofitable and the farmers returned to their mixed produce. A boat named the Walrus was fitted to be a floating sugar mill and serviced properties close to waterways all over Brisbane, although, there were also rumours that it was running a sly grog distillery. 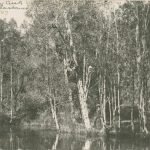 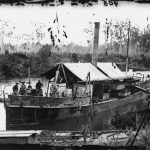 Floating sugar mill the Walrus 1869 – Image courtesy of the State Library of Queensland.

Flooding continued in Brisbane and particularly affected the Benarrawa catchment, there were large floods recorded in 1841 (8.41m), 1844 (7.03m), 1890 (5.33m), 1893 (8.35m), 1898 (5.02m), 1931 (3.32m), 1955 (2.36m), 1974 (5.45m), 1996 (2.70m), 2011 (4.27m) (Kemp, 2015). Aboriginal people had tried to warn the Europeans against settling in the flood prone region however, “the newcomers gave this Aboriginal knowledge little credence. Augustus Charles Gregory, surveyor-general in 1893, dismissed Indigenous understandings of these matters as the unreliable indistinct aboriginal traditions of a flood” (Kemp, 2015). Europeans decided to settle along river banks, building jetties and wharves along what was once vital mangrove habitats. The second largest flood on record occurred in 1893, this flood was the culmination of three floods occurring concurrently. The rains began on the 3rd of February and poured on and off until the 19th of February, houses, buildings and people were washed away during this enormous flood in the densely built river city. 80 feet of the Indooroopilly bridge (Royal Albert Bridge at the time) was destroyed on the 5th of February and disappeared under the flood waters, a sand bank was deposited in Chelmer by the flood currently where the Walter Taylor bridge is, this became a recreational are called ‘the sands.’ However, three boys playing on the sand in February 1893 caused the unstable sand to collapse burying two of the boys and throwing the third and only boy to survive into the river (Fones, 2004).

The Oxley Creek Common remained a farm in the Radcliffe family for many years and a home was built on high land to avoid the flooding, the Radcliffe’s’ sold their property to the Mumford family in 1925 and they became the second and last private owners of the Oxley Creek Common. The Mumfords ran a dairy farm with 120 cows milked twice a day, cattle would also graze un-fenced along the creek and, the creek flats were cultivated with corn, oats, and Lucerne. During world war two the U.S Air force had a radar instilation on the property that serviced a Japanese signal translation post in Chelmer. More flooding saturated the land in 1931 and the first aerial photographs were taken of the devastation, this area which would have been cloaked in dense forest is now bare and open to being submerged regularly. 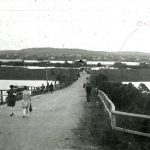 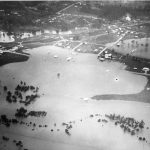 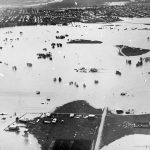 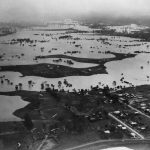 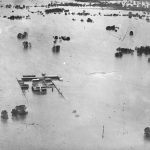 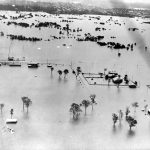 The Mumfords carried out experiments on sheep for Mr. Frank Bullock, the Minister for agriculture, mainly for foot rot and the quality and density of the wool and the Department of Primary industries (DPI) purchased the farm in 1952 and established an Animal Husbandry Research Farm. The Floods gradually became less severe as dams were built, however, in 1974 another massive flood submerged Brisbane and caused the death of 16 people. 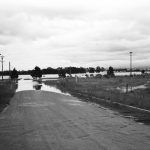 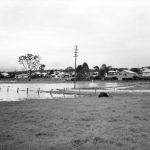 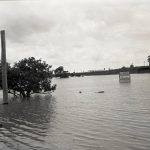 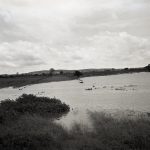 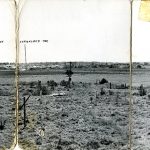 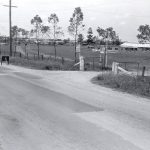 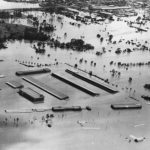 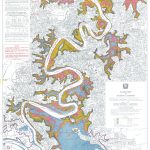 A significant landslide occurred in Corinda because of the 1974 flooding and was caused by the extensive clearing of vegetation for suburban development and the pore pressure of the heavy rains. The Animal Husbandry Research Farm remained at Rocklea until 2000 and was subsequently opened to the public as the Oxley Creek Common in 2003 with a 3.6 km return walking track. Bushcare groups have worked diligently to restore parts of the creek bank to a native and natural habitat, however, after many years of neglect invasive weeds have gained a strong foothold and constant rehabilitation needs to be done.

The 2010-2011 floods hit the Toowoomba and Brisbane regions and caused 36 deaths, Rocklea was the hardest hit Brisbane suburb and most of the area was well underwater. The flood damaged the nearby industrial estates contaminating the waterways with oil, toxic chemicals, heavy metals, and effluent. The whole of the Oxley Creek Common was submerged in the flood waters and sediment was pushed out to Moreton Bay, there was not enough vegetation to slow and capture the sediment that had been washed through the Common.

With community involvement and help in planting more trees, removing weeds, and maintaining the area we can bring this floodplain back to a healthy natural habitat for all the animals, including us.

Roberts, B. (1991). Stories of the southside. Archerfield, Qld: Aussie Books.