The Benarrawa Bushcare group started in 1994 when a group of residents decided to do something about a 1.3-hectare degraded area of bushland bounded by Allan Street and Gray Avenue, Corinda, adjacent to a small un-named tributary of Oxley Creek.

After applying to Brisbane City Council to become a Habitat Brisbane sponsored bush care site, the group set about removing piles of rubbish dumped on the site following the 1974 Brisbane floods.

Once this task was complete, Jenny Leask from Habitat Brisbane provided training, tools, and expertise to enable the group to start regenerating the site to natural bushland. This initially involved the removal of numerous Chinese elms, Pepper trees and masses of Asparagus fern and Madeira vine, amongst a myriad of other weeds. 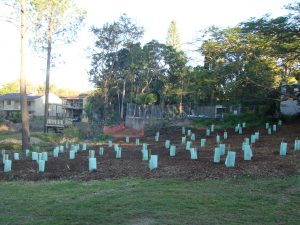 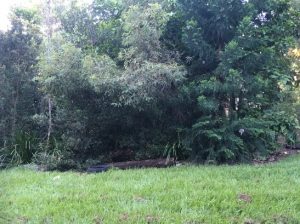 Once the Bushcare group was well established, and with the permission of the Aboriginal elders of the area, it was decided in 1999 to name the park Benarrawa Park which is the Jagera name for the Oxley Creek area.

A plant survey was undertaken by Amanda Fox from Greening Australia that identified remnant native species plus a myriad of weeds and the group set about managing the weeds and planting native trees and groundcovers that were originally in the area. The site now has a healthy overstory of dry rainforest and riparian plants including hoop pines, black bean and three-veined laurels.

There are over 200 established native plants and the site is home to a wide range of native fauna including bandicoots, water dragons and the occasional echidna. Many bird species live in and visit the reserve from the Oxley Creek Common. These include Channel-Billed cuckoos, Kookaburras, Orioles, a family of Boobook owls and the occasional Crested Hawk.

Over the 25 years of bush caring there have been plenty of setbacks including the 10-year drought, a fire lit by vandals in 2008, inundation during the 2011 flood and a severe storm in 2014 that destroyed several large remnant trees. It is an ongoing challenge to manage incursions of exotic weeds and the large volumes of storm water exacerbated by higher density developments in the neighbourhood.

Despite these challenges, the group has soldiered on and the park is now a pleasing to the eye tract of urban bushland providing habitat for an increasing number of native fauna. The group is often heartened by appreciative comments from locals who regularly pass through the reserve. The park is also a valuable corridor link to the riparian zone along Oxley Creek and the nearby Nosworthy Park Bushcare site.

Members of the Bushcare Group feel they have fostered a sense of community and brought neighbours together establishing long term friendships, whilst greatly improving the local environment.